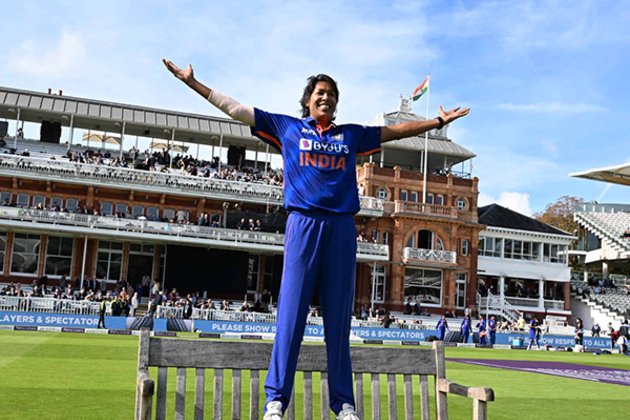 Many cricketers and administration figures took to Twitter on Saturday to bid Jhulan farewell and congratulate her on a legendary career.

Board of Control for Cricket in India (BCCI) Women took to Twitter to bid farewell to the legendary bowler.

"Records galore A legacy to be proud of Thank you @JhulanG10 TeamIndia," tweeted BCCI Women.

BCCI president Sourav Ganguly also bid farewell to the pace legend, saying that she will be a role model for women players for years to come.

"A fantastic career .. befitting that it ended on a winning note ..and she left with a good series individually ..will remain a role model for the women players for decades ahead @JhulanG10@BCCI," tweeted Ganguly.

BCCI secretary Jay Shah also thanked the bowler for inspiring the next generation of cricketers and serving Indian cricket for two decades with unmatched dedication and determination.

"The greatestmost successful fast bowler in women's cricket retires from int'l cricket after two decades of unmatched dedicationdetermination towards the game. Congrats @JhulanG10 on a phenomenal career with TeamIndia. Thank you for inspiring next generation of cricketers," tweeted Shah.

A lot of Indian cricketers also congratulated Jhulan on a legendary career and gave her wishes for the next phase of her life.

Former Indian batter Mithali Raj said that Jhulan's longevity as a fast bowler is beyond belief.

"Her longevity as a fast bowler in women's cricket is beyond belief. We have played together since our Under-19 days@JhulanG10's commitment to the gameher eternal optimism are lessons for all. The Indian jersey will miss you. Best wishes for your future endeavours, Jhulu," tweeted Mithali.

Star Indian all-rounder Hardik Pandya bid farewell to the legend, tweeting, "Congratulations on a glorious career @JhulanG10 Such an inspiration to the entire nation with all your achievements. Wishing you a happy retirement."Indian opener KL Rahul said that Jhulan is "one of the greatest ever to play the sport.""One of the greatest ever to play the sport. Your love, passion and dedication for the game is an inspiration to many. Thanks for all the wonderful memories. @JhulanG10," he tweeted. Indian spin great Ravichandran Ashwin tweeted, "Congratulations to one of India's finest cricketers, @JhulanG10 well done on a wonderful career and of course needless to say that you inspired so many girls to take up the sport. Good luck to you as you move towards a new chapter in life."Former Indian batter VVS Laxman also said that the country is proud of Jhulan.

"You've inspired generations @JhulanG10! For 20 years you've ran in hard and delivered the best for your country and we couldn't be more proud. Many congratulations on a wonderful career and best wishes for the road ahead!," tweeted Laxman.

"That purposeful run up That iconic jump Action you can set your watch to It'll all be missed.. But in the annals of World Cricket, the legend of Jhulan Goswami will forever stand tall! JhulanGoswami," tweeted Jaffer.

"Congratulations on an extraordinary career @JhulanG10 Your contribution to the game of cricket will forever be an inspiration for the nation JhulanGoswami TeamIndia," tweeted Raina.

Renuka Singh's four wickets, Rajeshwari Gayakwad's two-wicket haul and an all-round effort from Women in Blue helped India give Jhulan Goswami a series-winning farewell as they bundled out hosts for 153 in the third ODI against England at Lord's ground on Saturday, winning the game by 16 runs.

Earlier, India had set a target of 170 runs for England after being bundled out for 169. Smriti Mandhana (50), Deepti Sharma (68) scored brilliant half-centuries to help India reach a respectable score. Kate Cross (4/26) was the leading bowler for England.

Jhulan bagged two wickets in her last outing and was dismissed for a golden duck.

TOKYO, Japan: Japanese prosecutors raided the headquarters of advertising company Dentsu, as part of a widening investigation into corruption during ...

NEW YORK, New York - Concern about the spreading of Covid-19 across China kept investors on edge Monday, with all ...

LONDON, England: The UK National Crime Agency has obtained a civil recovery order for some $65 million of suspected criminal ...

Stocks markets across Asia Pacific rattled by protests in China

WASHINGTON D.C.: The U.S. is banning the importation of all communications equipment made by Chinese companies Huawei and ZTE, citing ...