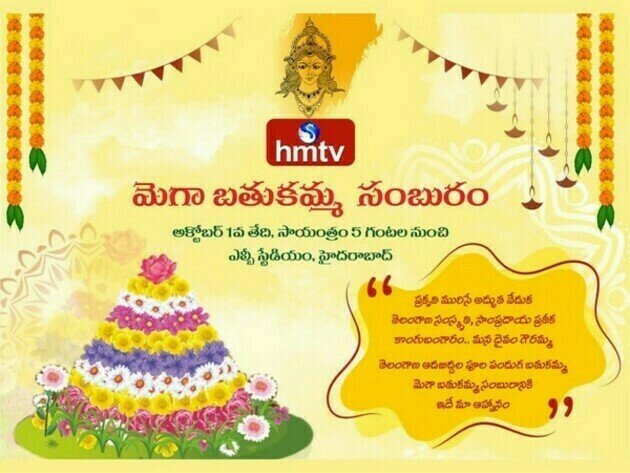 Celebrations for the annual Bathukamma festival have begun across the state. Joining in the festivities, hmtv, the 24-hour Telugu news channel, has organised a mega event on October 1.

The mega Bathukamma Samburam will be held at LB Stadium in Hyderabad on Saturday, October 1.

The event is expected to be attended by over 10,000 people, including the who's who of Hyderabad. The celebrations will begin at 4 pm.

"For the last two years, because of the Covid-19 pandemic, we were not able to celebrate Bathukamma Samburam as we used to in the past. With the pandemic behind us, there is great enthusiasm among people to celebrate the festival this year. We are organising a mega Bathukamma Samburam this year to join the celebrations and usher in positive vibes during the popular festival," said N Lakshmi Rao, CEO of hmtv.

Bathukamma is a flower festival celebrated in Telangana and some parts of Andhra Pradesh. The festival is nine days long and falls around Navratri. It is mainly celebrated by women and concludes on Durgashtami. A flower stack is prepared with flowers having medicinal values, representing a temple, to offer prayers. People also make flower rangoli on all days. It is also an occasion for families to get together.

There are several legends surrounding the festival, but the common thread is the worship of the Mother Goddess. One of the beliefs is that it is celebrated to thank Goddess Parvati for her benevolence in terms of good agricultural produce and income and to seek her blessings for the next year. It is also believed that the festival asks for the return of the Goddess and is dedicated to Goddess Parvati since Devi Sati was reborn as Parvati.