A Puja Tale of 2 cities: The Times of India's Maa Aaschen. Tumi kothaye? celebrates togetherness this Durga Puja, even if separated by miles 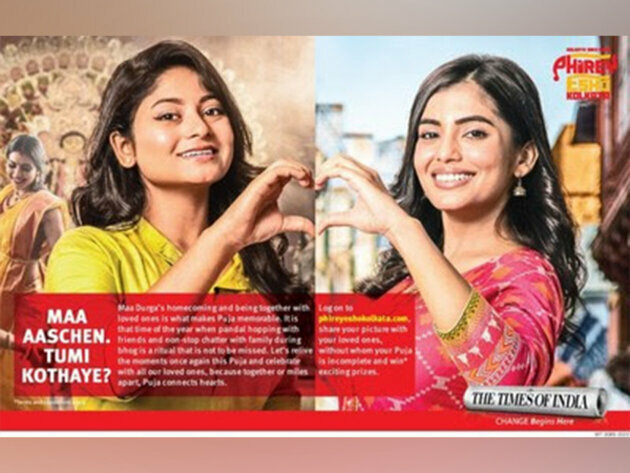 Kolkata (West Bengal) [India], September 30 (ANI/PRNewswire): The Times of India under their campaign Phirey Esho Kolkata, has launched a special edition of 'Maa Aashcen. Tumi kothaye?' on Durga Puja, celebrating togetherness and connection between loved ones during the festival.

'Maa Aaschen. Tumi kothaye?' literally means Maa Durga is coming home, where are you? Each year, during this time of the year, loved ones travel back to Bengal to be together for the biggest celebration of the year - to celebrate the homecoming of Goddess Durga. The beauty and the spirit of the festival is best enjoyed when it can be shared with families and friends. But there are many across the globe and in other Indian cities, who are unable to make it to their home this festive season. Though they will be celebrating the festival with passion in whichever part of the world they are, floods of memories will crowd the mind.

'Maa Aaschen. Tumi kothaye?', an initiative of The Times of India is a celebration of this feeling of belonging, of togetherness, and of reaching out to near and dear ones, who can't be with their near and dear ones this year. Loved ones will urge those separated to continue with the celebrations wherever they are. The idea is to remind them that they are with them this festive period and that is the real essence of Durga Puja.

The print campaign brings this alive by showcasing visuals of two friends connecting through a symbol of joining their hands forming a heart. The campaign video is a tale of two friends, who now live in two different cities - Mumbai and Kolkata. The film features actress Priyanka Sarkar and dancer, actress Sreenanda Shankar as friends who share their story of separation and how Puja unites them.

The film begins with both friends reminiscing a promise that they made years ago that they will never spend any Durga Puja without each other. But unfortunately, they have not been able to fulfil their promise. The video portrays the unconditional friendship between two friends, who, though settled in different cities, share the deep emotional bond among themselves. As a ritual and marker of their presence, they have sent each other Puja gifts - sarees and silver jewelry. The two of them might be physically apart as one will celebrate Durga Puja in Lokhandwala and another in north Kolkata but in spirit they will be together as they take part in Sandhi puja, Dhunuchi naach and other rituals and traditions, wearing each other's gifts. The film beautifully reminds us that the autumn sky is the same everywhere and it never allows us to be separated. The festive spirit of Durga puja unites everybody's hearts wherever they are, in spite of the distances.

"While shooting for the film, I was constantly thinking of my best friend, who is now settled in Kerala. I have innumerable memories of Durga Puja from childhood to teenage years with her so during the festive season, I miss her very much," said Sarkar, adding that she liked the story of the film because it celebrates the unconditional bond between two friends and also portrays how both of them understands each other's circumstances of not being able to make it to the Puja in spite of making promises.

Shankar echoes the same thoughts but is excited to be back in Kolkata to spend the Durga puja with her family. "There have been occasions when I had tours during puja so I could very well relate to the emotions portrayed in the video. But thankfully, this year, I will be able to spend the puja days with my loved ones at home in the City of Joy," added Shankar.

The film is partly shot in Mumbai with Shankar with Bandra Worli Sea Link as the backdrop and partly in Kolkata's Kumartuli and iconic bonedi bari 'Badan Chandra Roy' with Sarkar. The palatial house hosts the 186-year-old Durga puja, which started in 1858. In front of the arched 'Thakur Dalan' there is a beautiful quadrangle marked by pillars and lamps.

In an endeavor to connect with readers to celebrate with missed loved ones, TOI invited them to share the pictures on www.phireyeshokolkata.com. Hundreds of entries from Kolkatans and Bengalis across the cities have been received. Select quotes have been featured in the newspaper.

Gini Majumdar, from Kolkata writes "My fifth puja without my son, as he is out of Kolkata for five consecutive years, three years in Bangalore and last two years in Glasgow. Missing him, and hope he joins us next year"

TOI & Languages Brand Director Kaustuv Chatterjee says "TOI, India's most trusted news brand, has always celebrated the incredibly rich socio-cultural fabric of our country. Durga Puja is one of the largest festivals in the nation, in which people from all sections and communities participate and come together, not just Bengalis, to seek Durga Ma's blessings. 'Maa Aaschen. Tumi kothaye? Phirey Esho Kolkata' is created for Durga Puja to celebrate and reinforce this value of coming together, more so with those most precious to us. The campaign is about celebrating togetherness even if they are miles apart from family and friends because our festival teaches us to celebrate 'life'."

This year the video has been scripted by music director, singer, lyricist Anindya Chatterjee, the video talks of Puja and how everyone carry the festivals in their hearts wherever they go, much like their loved ones.

This story has been provided by PRNewswire. ANI will not be responsible in any way for the content in this article. (ANI/PRNewswire)