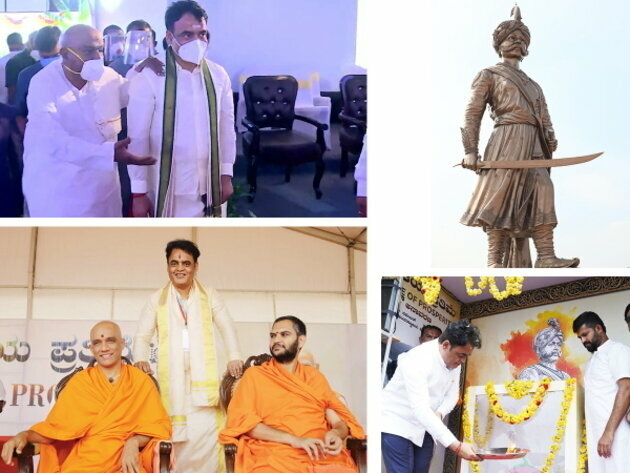 New Delhi [India], November 21 (ANI/SRV): Sacred soil from across Karnataka has reached the feet of Kempegowda and is being used in the gopuras surrounding the Statue of Prosperity. The "holy soil collection" programme of the Karnataka government, as part of its initiative to unveil the "Statue of Prosperity" in memory of Nadaprabhu Kempegowda, has virtually become a Thanksgiving moment for the people.

Dr. Ashwathnarayan, a senior minister and popular Vokkaliga community leader, spearheaded the entire campaign. "Kempegowda Rathas" fanned out across Karnataka state, covering villages and towns and reportedly traveling 22,000 kilometers. Widespread enthusiasm shown by villagers during the exercise transformed it into a "mass movement" with a life of its own.

In Indian culture, it is believed that the people are intimately connected to the land they live on. The belief in the Bharatiya Janata Party too, says Dr. Ashwathnarayan, is that only with the people's blessings can any project be carried out on scale, and hence the idea to collect sacred soil from across Karnataka for the statue, as that would be a proof of validation for the whole project.

At these places, people converged in large numbers and enthusiastically offered sacred soil to the statue as a mark of respect for the contribution of the Nadaprabhu to their lives.

The collective soil, now stored in Bengaluru, is being used to create the foundations for the four gopuras, or watch towers, that will flank the statue of Kempegowda in all four directions. For the uninitiated, the gopura of Kempegowda is the emblem of the Bruhat Bengaluru Mahanagara Palike, the civic body that preserves Bengaluru.

The exercise is reminiscent of the time when soil and water were brought from across Andhra Pradesh by then chief minister N Chandrababu Naidu for the foundation ceremony for the new capital, Amaravati. Naidu had then flagged off the Amaravati Sankalpa Jyothi Yatra with water and soil pots from Acharya Nagarjuna University to Uddandarayunipalem.

The Statue of Prosperity, while unmistakably celebrating the founder of Bengaluru, also looks to co-opt the community called the Vokkaligas, to which Kempegowda belonged, into the nationalist-development narrative of the BJP. The Vokkaliga community, which has largely been seen to be represented by the Janata Dal (Secular), an outfit with specifically regional concerns,

The BJP is looking to woo this social segment, just like Kempegowda did with his brilliantly productive social engineering based on the principles of harmony and equality. Visible in this effort and outreach was the role of Dr. Ashwathnarayan, currently state minister and vice chairperson of the Kempegowda Heritage Area Development Authority.

With the unveiling of Kempegowda's Statue of Prosperity by PM Modi, preceded by a successful election campaign, the BJP party has now blown their poll bugle in Karnataka state. Ramachandra, a popular leader among the Vokkaliga community, opined, "In 1952, Kengal Hanumanthaiah built Vidhana Soudha. In 2005, SM Krishna built Vikasa Soudha. In 2022, Dr. Ashwathnarayan will have built Kempegowda's statue. With this, the BJP has started to win the hearts of Vokkaligas".

The BJP's "success" appears to have shaken the JD(S), which bills itself as the only party that represents the Vokkaligas and the "sons of the soil."With the Prime Minister of India choosing to fly down and unveil the statue of Kempegowda, the message is further clear: The Nadaprabhu matters to India, and so does his Bengaluru.

Elections to the Karnataka Assembly are due in a few months, and the jury is out on whether this move will endear the Vokkaliga to the BJP. But one thing is clear: The fight for the Vokkaliga vote is getting intense, and Dr. Ashwathnarayan has clearly emerged as the key Vokkaliga leader in the BJP camp.

This story has been provided by SRV ANI will not be responsible in any way for the content in this article. (ANI/SRV)

IRVING, Texas: Exxon Mobil Corp will wind down oil production in Equatorial Guinea in West Africa after its license expires ...

HOUSTON, Texas: QatarEnergy and ConocoPhillips have signed two sales and purchase export agreements covering at least a 15-year period, which ...

ISLAMABAD, Pakistan - Russia refused to give Pakistan a 30-40 percent discount on Russian crude oil, claiming that all volumes ...