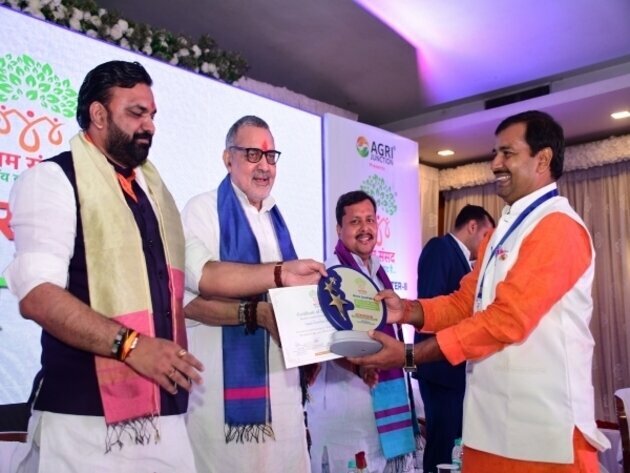 New Delhi [India], November 30 (ANI/SRV): Mukhiya Digambar Mandal was honored by the Gram Sansad for his excellent work in his panchayat. He received the honorific title "Adarsh Mukhiya" during a ceremony hosted by the Gram Sansad. The Union Minister of Panchayati Raj Department, Giriraj Singh, and the panchayati-raj-minister">Panchayati Raj Minister of the Bihar Government, Samrat Chaudhary, honored him with this title.

While accepting the award, Chief Digambar Mandal revealed that he had previously been recognised by the federal government as the "Best Chief Mukhiya of Bihar," and in a ceremony hosted by the Gram Sansad, he was presented with organ clothing and a memento by Union Animal Husbandry, Dairy, and Fisheries Minister Giriraj Singh. When the Babhangama Panchayat gained respect and notoriety on a national scale, he claimed it was a proud moment for the Babhangama Panchayat.

Union Minister of Panchayati Raj Giriraj Singh said that many schemes are being run to empower the panchayats, the benefits of which are also visible. To reduce corruption, the amount of money from central and state government schemes is now given directly to the panchayats, which have done better work. He has also been put forward as a role model.

The panchayati-raj-minister">Panchayati Raj Minister of Bihar, Samrat Chaudhary, said that through Gram Sansad Chapter-II, an opportunity is being given to have a direct dialogue with the selected Panchayat representatives of Bihar. He said that the state government is fully determined to strengthen the Panchayati Raj system in Bihar. All the schemes sponsored by the Center for Panchayats are running smoothly everywhere. The security of panchayat representatives is convenient for expediting development works, and the government is completely serious on issues like solving basic problems. Panchayat Raj Sarkar Bhawan is now being constructed in the panchayats of Bihar, where the people of the panchayat will be able to get the benefit of all the government schemes under one roof.

Mukhiya Digambar Mandal's wish is to make Babhangama a hi-tech village where all the houses are pucca and every person gets employment. Like cities, his village should also have internet facilities, and with new farming techniques, fruits like papaya and dragon fruit can be produced in greater numbers. If the condition of the villages improves, then the people of the state will not have to migrate outside. From here, they will all be able to earn a good living. He aspires to make his village famous on a national scale as part of his dream mission for 2030.